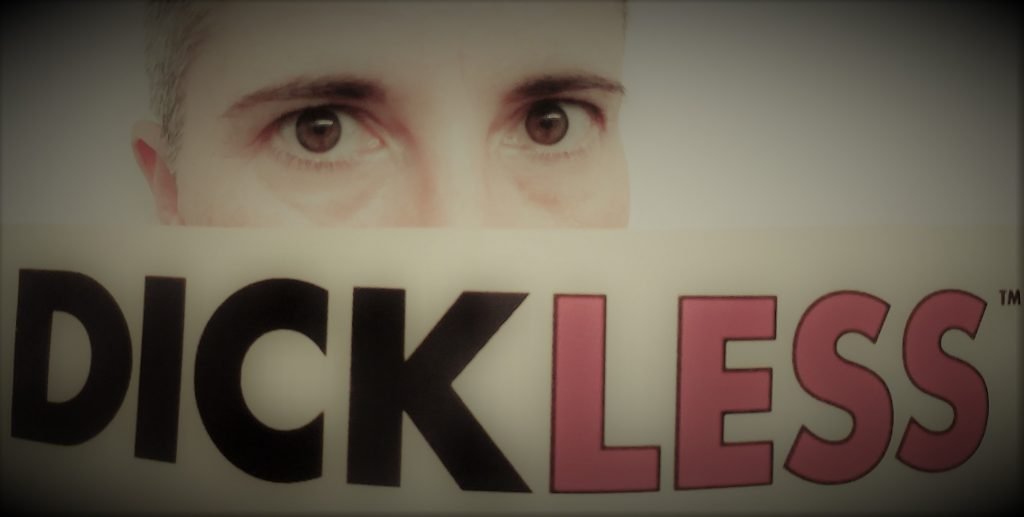 I’m a woman. I was born that way. But there’s more to being dickless.

As a woman in corporate America, I quickly became familiar with the term dickless. The exclusion factor—based on the lack of one (attached-at-birth) penis—is so openly and purposefully executed—that we all seem to have accepted it as the normal status quo of our work environments.

Nonetheless, I decided to accept my dicklessness. I’m not ashamed of being a woman. Cannot fathom the idea why the lack of one male body part should prevent me from achieving anything I set my heart and mind to.

Eventually, I even embraced my dicklessness. I took the negative connotation, and I turned it into the DICKLESS brand, making it a talking point for men and women.

It has worked: As of late, I had some folks comment that they are offended by the word DICKLESS.

Guess what? That’s the intention. Do you think it was me who came up with this label? I’m offended that I had to form the Dickless brand. It’s not my fault that women do not have the same rights, opportunities, or salaries as men.

But since I get to live in that reality every day—and let’s be honest, women aren’t really making great progress at demanding more for themselves—I felt the urge to give the women’s movement a little push into a blunter direction.

And speaking of the women’s movement:

Why can’t we acknowledge that the women’s movement is not a movement against men? It’s a movement for women to get the same opportunities, treatment, pay, etc. as men. Women are not out to put men in the same spot they were put in by men. It’s amazing how men fear that they may have less of everything in the future if they support women. Hang on… equality means the same as, so… I guess there will be less for men if things go the way they should. Doesn’t it show just how uneven the scales currently are? That the system had to be rigged to keep men in power in order to keep the women out? Now that you know, you can’t hide behind ignorance anymore.

I’m not a man-hater. I can’t speak highly enough of the male mentors who have supported me in my life. But we need more of them in all aspects of a woman’s life. Which means, men need to leave the bubble of denial that has protected them from claiming awareness.

The excuses need to stop which blame ignorance for intentionally turning a blind eye toward the unequal treatment of women.

There’s so much every one of us can do—every day.

I will not be silent. I will take my brand and proudly display it on my t-shirts, my business cards, my website, etc. I will not tone down my rhetoric because some are offended by the word and not by what the word represents. Society has defined me as DICKLESS, and I’m going to be the reminder that this needs to change. Until it doesn’t matter anymore if we are born with a dick or not.

It’s up to all of us to decide when to retire my brand.

IN THE MEANTIME, IF YOU WANT TO HELP PROCLAIM YOUR SUPPORT FOR THE DICKLESS, THEN check out my online shop FOR SOME COOL MERCHANDISE!  Thank you!